The aim of this project is to extract structured data from digital copies of identification documents used in the administration of the White Australia Policy. To do this we’re creating a website using the open source Scribe Framework.

Scribe is designed to work with structured data — the sort you find in forms and certificates. It breaks the transcription process down into three main tasks:

Marking identifies the fields that need to be transcribed. All you do is choose the field from a list and then draw a box around the corresponding value in the document. You might also be asked to mark things like photos, handprints, and Chinese characters.

Transcribing is fast and fun! All you do is type what you see in the highlighted area of the document. The handwriting can be tricky at times, but you don’t need to worry too much as each field is transcribed multiple times for accuracy. Just try your best!

If transcribers disagree about the contents of a field, it’s sent to an additional verification stage, where you vote on the most accurate transcription. Once a broad consensus is achieved the field is tagged as complete.

The transcription site is almost ready. We’ll be posting a link here on Saturday, 9 September. You can also follow @invisibleaus and like our Facebook page for updates.

The site will be open to all willing volunteers — wherever you are around the world you can help us document and understand the lives of people living under the restrictions of the White Australia Policy.

If you’re in Canberra on 9-10 September, bring your laptop along to the Museum of Australian Democracy at Old Parliament House where we’ll be running a transcribe-a-thon. How many documents can we transcribe in a weekend? 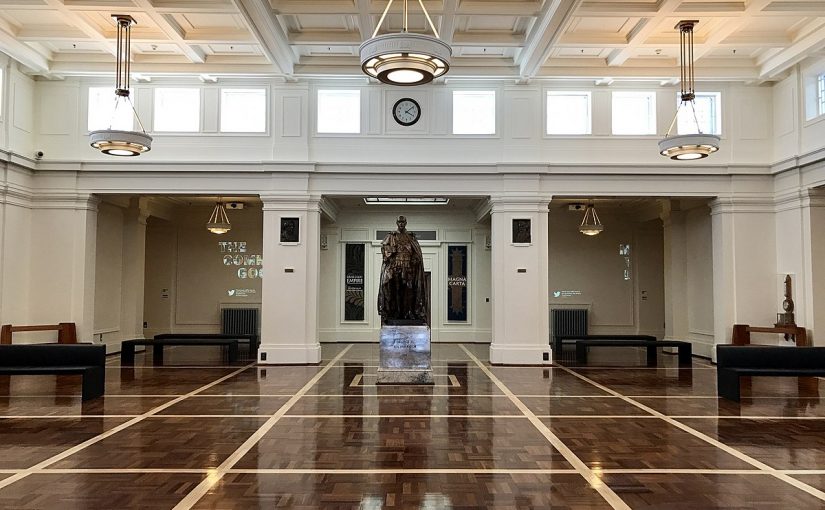 Come and try your hand at transcription, or simply find out out more about the project. We’ll be set up in King’s Hall all day, so drop in! There’ll be live updates on the progress of the transcribe-a-thon projected on the walls of King’s Hall. How many documents can we process in a weekend?

Sophie Couchman, ‘Chinese in Australia and the making of the mugshot’

Dr Sophie Couchman is a curator and public historian with an Honorary Research Fellowship at La Trobe University. She is interested in the place of migrants in Australia’s history and has researched and published in the field of Chinese Australian history and heritage for many years, including as Curator at the Chinese Museum in Melbourne. Sophie has a particular interest in the creation and circulation of visual representations and how they shape our understandings of Chinese Australians, a topic explored in her PhD research on Chinese and photography in Australia from the 1870s to the 1940s.

Kate Bagnall, ‘Women and the records of White Australia’

Dr Kate Bagnall is a Canberra-based historian and writer. She currently holds an ARC DECRA Research Fellowship in the School of Humanities and Social Inquiry at the University of Wollongong, where she is working on a comparative study of Chinese colonial citizenship in Australia, Canada and New Zealand. Kate has published on various aspects of Chinese Australian history, including on the administration of the Immigration Restriction Act and on the archives of White Australia. She is @baibi on Twitter and you can find her blog at www.chineseaustralia.org.

Dr Peter Prince has spent the last 15 years working on ‘aliens’, much to the amusement of his children. He published a series of papers for the Commonwealth Parliamentary library on the subject and in 2016 completed a PhD thesis with the ANU College of Law on use of the word ‘alien’ as a key language tool in the creation of a ‘White Australia’. He has worked for Defence and the DFAT and is currently a lawyer with the Department of Health, working mainly in the aged care area.

Come and try your hand at transcription, or simply find out out more about the project. We’ll be set up in King’s Hall all day, so drop in! There’ll be live updates on the progress of the transcribe-a-thon projected on the walls of King’s Hall. How many documents can we process in a weekend?

Lisa Russ, ‘The six degrees of fingerprints: Leave your fingerprint!’

Lisa Russ is currently a Bachelor of Heritage, Museums and Conservation student at the University of Canberra. She has lived in Canada, the United Kingdom, and now calls Australia home. Transcribing and analysing Series ST84/1 documents, many of which have handprints, inspires Lisa to talk about the power of fingerprints.

Tim Sherratt, ‘Mobilising the digital: A live experiment in meaning, place, and history’

Dr Tim Sherratt is a historian and hacker who researches the possibilities and politics of digital cultural collections. He’s worked across the cultural heritage sector and has been developing online resources relating to libraries, archives, museums and history since 1993. Tim’s tools and experiments include important things like The Real Face of White Australia, useful things like QueryPic, and weird things like the Vintage Face Depot. He’s currently Associate Professor of Digital Heritage at the University of Canberra. You can find him at timsherratt.org or as @wragge on Twitter.

We’re building a website to transcribe official documents that reveal the impact of the White Australia policy on the lives of ordinary people in the early twentieth century.

Using the site we’ll turn digitised files held by the National Archives of Australia into new data for research and exploration – but we need your help!

Come to our Transcribe-a-thon

We’ll be launching the site at a Transcribe-a-thon on the 9-10 September at the Museum of Australian Democracy in Old Parliament House. Bring your laptops and join in as we see how many documents we can transcribe in a weekend! We’ll also have a program of expert speakers discussing the records and their significance. Come along and learn more about the history of the White Australia Policy.

The transcription site will go live on 9 September, so check back here then for the link. We have more than 13,000 documents to classify and transcribe, so there’s plenty of work for everyone! Why not organise your own local transcribe-a-thon?

Follow @invisibleaus or our Facebook page for updates. If you’re joining in online let us know using the hashtag #uc10154.

We’re digital heritage students at the University of Canberra, led by Tim Sherratt.

Our transcribe-a-thon at the Museum of Australian Democracy is coming soon! Help us spread the word with these posters created by our very own Design Team.

For a guide to the evolution of the forms we will be transcribing during this project, have a look at Kate Bagnall’s post Form 21 certificates, 1902–1908.

One of the tasks built-in to the transcription process will be identifying the type of form being transcribed. The precise data fields will change depending on that identification — so get to know your forms!

Scribe is a powerful framework for the collaborative transcription of archival documents. Unlike other transcription tools, Scribe is particularly well suited to the extraction of structured information, such as you might find in forms, registers, or certificates. You can see it in action on the Measuring the Anzacs site.

We’ll be using Scribe to get data out of records created by the operations of the White Australia Policy. But first we needed to update a few things. We’ll be hosting our site on Heroku and MLab, but the software supported by these sites doesn’t quite match the versions used in Scribe. We’ve forked the ScribeAPI repository and updated various things so that it can be easily hosted on Heroku.

We’re using this updated version of Scribe as the basis for our own site. 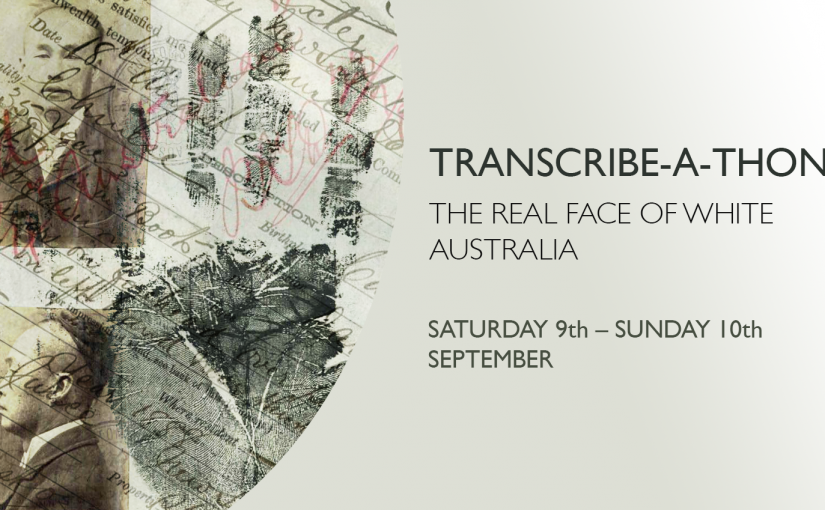 This year in Exploring Digital Heritage we’ll be undertaking a major project on the White Australia Policy, working with records from the National Archives of Australia and collaborating with the Museum of Australian Democracy.

Our task will be to transcribe and analyse digitised files from Series ST84/1 in the National Archives. Under the White Australia Policy, anyone deemed not to be ‘white’ who travelled overseas had to carry special documents. Without these documents they could be subjected to the Dictation Test and denied re-entry — even though they might have been born in Australia.

These certificates contain information about ordinary people living their lives despite the restrictions imposed on them by a racist bureaucratic system. By transcribing these documents — extracting information about their names, their ages, their places of birth, their travels overseas — we hope to learn more about them and their experiences.

Only about 15% of Series ST84/1 has been digitised so far, but I estimate that there should be about 6,000 of these certificates already available online. There are two copies of most certificates, so that’s about 3,000 unique certificates. That’s a lot of transcribing!

To extract the data we’ll be making use of Scribe, a community transcription platform developed by Zooniverse and the New York Public Library. Students will develop documentation for the site and support volunteers.

The transcription site will be launched on the weekend of the 9-10 September at a ‘transcribe-a-thon’ hosted by the Museum of Australian Democracy. Across the weekend we’ll have transcription stations set up in Kings Hall. We’ll also have a series of expert speakers talking about the records and what they can tell us. Students will be managing communications and event planning related to the ‘transcribe-a-thon’. It’ll be an exciting event — come along and help!

Once we have a significant body of records transcribed we’ll start to explore how we can use digital tools and technologies to analyse, visualise, and link the data. What can we see, and what can we learn? What new research possibilities might emerge?

Lots to do, but at the end we’ll have made a real contribution to our understanding of how people lived under the weight of the White Australia Policy.